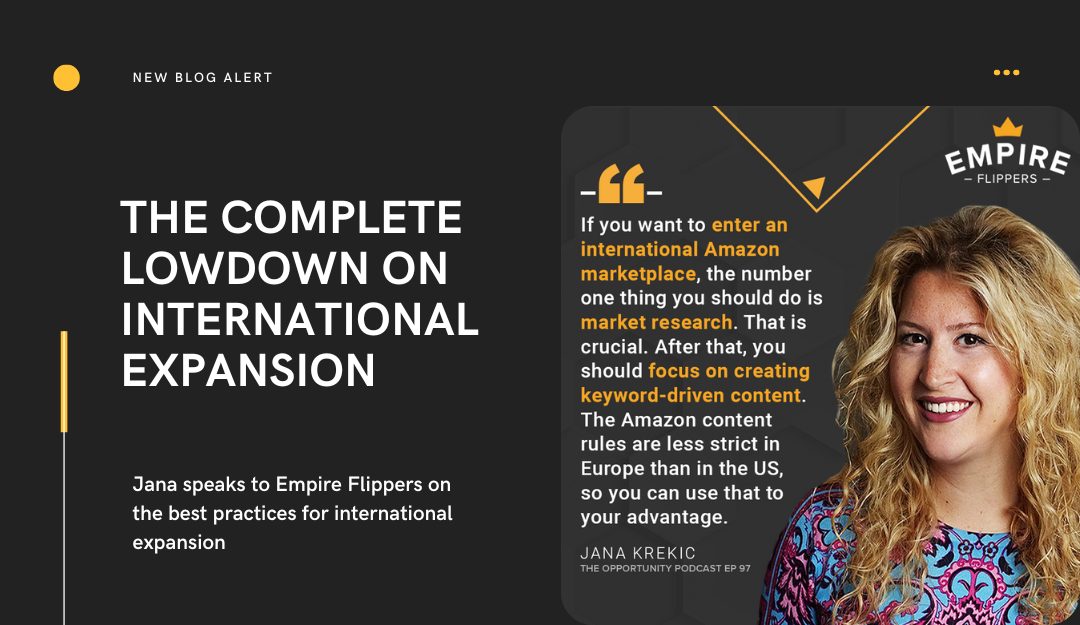 There are two types of sellers that consider international expansion from the American market to a foreign market:

Frankly, the US market is the most challenging of the Amazon markets, with the most rules. It’s hard to get ahead of competitors.

That’s what Jana talks about on the recent Empire Flippers Podcast. The animated chat covered many important topics that FBA sellers need to consider before starting their international expansion:

The Honeymoon Period and Why You Shouldn’t Take It Lightly

What’s an astute seller to do? To begin with, don’t use Google Translate for your keywords.

Keyword Research and its Role in Your International Expansion

Once upon a time, a seller selling baby diapers in the USA decided to sell on the UK market as well. Thinking that both countries spoke English, she decided to copy-paste her US listing onto her UK listing. Imagine her confusion when she started ranking for adult diapers! Naturally, her conversion rate optimization in this international expansion project as low; mothers aren’t very likely to search for Huggies alongside Prevail Pull-Ups. It all could have been avoided if the seller in question had used nappies instead of diapers.

It’s a classic mistake. Localization is key whenever you transfer markets, whether you’re transferring to a new language or not. These instances are easily avoided when the appropriate research is done – both for keywords, and for the market in question. Market research will help identify customer need and what your target market expects to see in products like yours.

Which International Markets Should a Seller Watch Out For?

Everyone’s talking about Amazon’s expansion to the Middle East – but there are other countries that are ripe for the picking.

The top choices are Canada and Mexico, because of proximity, but Europe is a good destination as well. Lots of sellers choose the United Kingdom because of the language – so there’s the assumption that amazon.co.uk is the best international market to expand to. This is actually inaccurate, because Germany is the largest market outside of amazon.com. (Check out our article here to find out the Best Practices in German Listings.) After Germany, France and Spain are viable markets, as well. (Pro tip: Mexican Spanish and European Spanish are not the same, and neither are European French and Canadian French.)

Other markets worth looking out for are Poland, Sweden, and the Netherlands.

Outside of Europe, sellers would do well to consider international expansion to Amazon Japan – but be forewarned; Western bestsellers don’t always do well in Japan. In Jana’s words, Japan is a whole new world altogether.

How to tell which market to enter? It’s quite simple. Type your product in different places in Brand Analytics, and take note of the results. That’s the most data-driven way to tell.

Nuances to Consider in International Expansion

The keyword “portable AC” didn’t do well in the US. The monthly search volume didn’t even hit 2000. Anyone thinking of selling portable ACs on amazon.com was set up for failure. On the other hand, it’s one of the top-selling products on Amazon Germany! There are other similar products that do very well on market XYZ, but tanks on market ABC.

“You have to have a business plan,” Jana stresses. “Research is crucial. You can’t just launch where you feel like (if you want to succeed).”

Even if you have just one product you’d like to explore international expansion for – it’s ideal to have a plan. So much comes down to culture – what works for a certain set of customers may not work for another.

Europe is also behind the US. Things that are allowed in European listings are totally frowned upon in the US market. For example, Amazon US doesn’t allow for caps lock anywhere in the listing – but European markets encourage caps lock for bullet point headers. Similarly, Google in the US is quite sophisticated vs. Google in other parts of the world. These nuances, and more, need to be considered before heading towards international expansion.

Why Was the US Shampoo Banned in Germany?

Products like supplements, beauty products, and baby products – and anything with an ingredient list – are tricky. A shampoo was banned in Germany because, as it turned out, an ingredient in the shampoo was a prescription drug! All of that stress and wasted time could have been avoided with some careful market research before embarking on the international expansion.

Also, consider that customs will now insist that product packaging is written in the language a product is sold in. If you’re selling in Italy, France, Japan, Sweden, and the USA, then your packaging needs to be written in Italian, French, Japanese, Swedish, and English.

Again – these are little nuances that a little market research can help identify. Not pursuing these little issues carefully could wind sellers up with wasted inventory in a market that won’t even allow them to launch.

This Wisdom, and So Much More…

Get the full story here! Consider it a crash course in international expansion…any Amazon seller looking to head into global expansion needs to consider these localization tips!