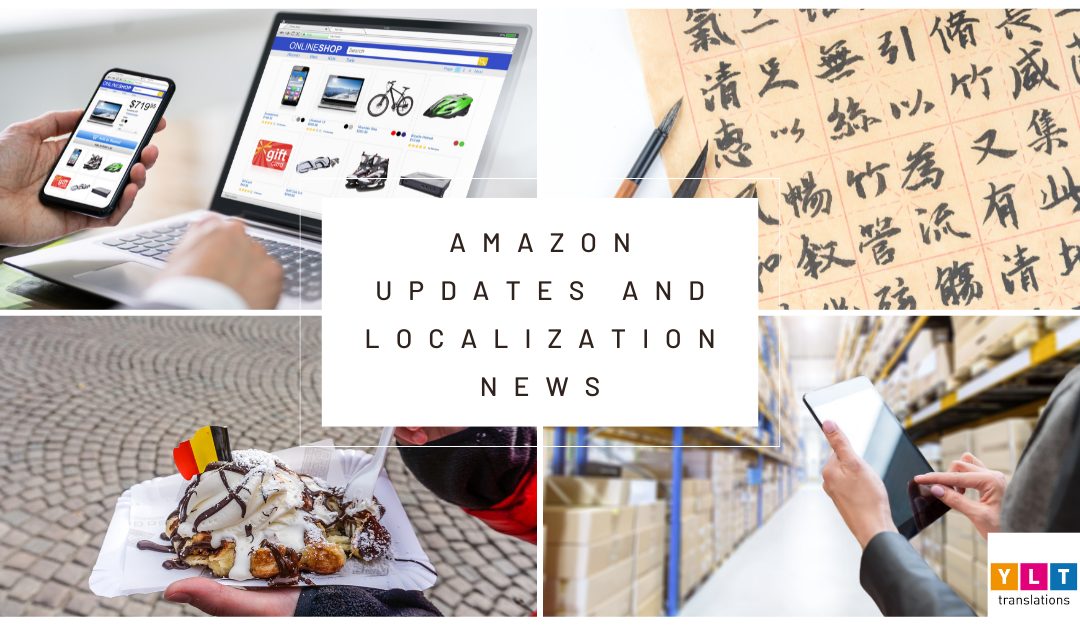 We all know it to be true – things change at breakneck speed in eCommerce. This week, we’re sharing important eCommerce news and localization updates with you. Read on for some interesting updates. We wonder how these developments will proceed in the next few weeks, months, and years!

Brace yourselves – on October 11 and 12, Amazon’s new event gives Prime members access to holiday deals. Furthermore, Amazon’s releasing a specially-curated Top 100 List, featuring fantastic deals from big brands like Hasbro, iRobot, KitchenAid, and Samsung. Prime members can get up to 80% off on select Fire TVs and smart TVs, and save big on chosen Alexa devices. Other brands to watch out for include Peloton, New Balance, Caudalie, Murad, Philips Sanicare, LEGO, adidas, Furbo, and Ashley Furniture.

Grab holiday shopping inspiration from gift guides in home and toys, and keep an eye out for Amazon’s Toys We Love list.

The event is open to shoppers in Austria, Canada, China, France, Germany, Italy, Luxembourg, the Netherlands, Poland, Portugal, Spain, Sweden, Turkey, the UK, and the US.

The full press release can be found here.

Chinese is the World’s Most Spoken Language

Chinese is now considered a “macro language.” It beats out the other languages by 3x the amount of speakers. Interestingly, the majority of the language is spoken in China, with outliers in Hong Kong, Taiwan, Malaysia, and to a smaller extent, other Asian countries. The next contender on the list is Spanish, with around 1/3 of the rank of China – but Spanish speakers are widespread. The majority of Spanish-speakers are in Spain, but followed closely behind by the United States, and then by Mexico. Afterwards, the South American countries follow with smaller percentages. The third most spoken language in the world is English, which is spoken predominantly in the USA, followed by the UK. Canada and Australia follow with smaller percentages. Interesting contenders include Hindi and Arabic.

It’s a great idea to include Spanish in your back end keywords. Keep an eye on MENA – Amazon definitely is. As for Amazon’s presence in China and India? Time will tell. Right now, taobao.com dominates China, although Amazon India is the most popular eCommerce platform in that beautiful country.

Amazon Antwerp is the Next Big Thing

We all know that Amazon plans to expand aggressively in the Middle East. We even wrote a blog about it, which you should definitely not miss if you hope to stay on top of this huge development. It looks like MENA is not the only location on Amazon’s radar.

Amazon plans to open its own delivery station in Antwerp, creating massive job opportunities in Belgium. Furthermore, we all wait with bated breath for sell.amazon.com.be, a Belgium-centric Amazon platform. This is huge precisely because Belgians shop on amazon.fr, amazon.nl, and amazon.de. Belgium is divided into 3 regions, and across the country, either Dutch, French, or German – or a combination of these languages – are spoken. To have a marketplace that’s solely devoted to Belgians is a localization feat, for sure!

Furthermore, in a surprise move that nobody anticipated, Amazon removed shipping fees for shipments going to the Philippines, provided the item includes free global shipping and the check-out amount is over $49. Customs duties, taxes and fees or “Import Fees” may still be charged to the customer. This is huge because the Philippines has the 2nd highest average daily internet usage, second only to South Africa. eCommerce in the former American colony is dominated by Asian eCommerce sites Lazada and Shopee, but perhaps thanks to this friendlier shipping system, Filipinos will explore Amazon, giving Lazada and Shopee a run for their money.

Last but not least, keep your eye on these deadlines. Amazon sellers have to send their inventory to fulfillment centers by these dates, so mark them in your Google Calendar:

Let us know, did this news interest you or provide value? Which news snippet interests you the most?