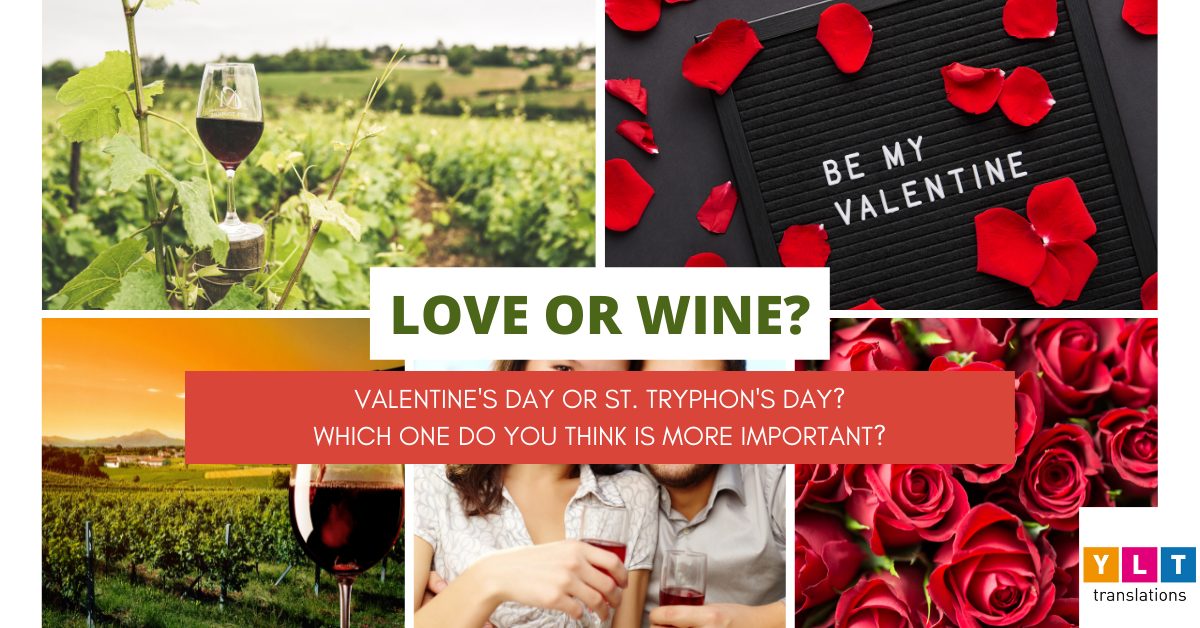 Lupercalia. Does this ring a bell? It’s not surprising if it doesn’t – Lupercalia is the name of a Roman fertility festival that our ancestors celebrated until the end of the 5th Century CE. Pope Gelasius outlawed Lupercalia, deeming it un-Christian and immoral. Instead, he declared February 14 as Valentine’s Day.

Yet, did you know that in Serbia, which is where YLT was born, Valentine’s Day doesn’t take the cake on February 14? Mladen Mojsilovic, our project manager, shares that St. Tryphon Day is more popular!

In the spirit of love and acceptance, let’s delve into the Valentine’s Day customs all over the world.

February 14 heralds the beginning of pruning season. In Aranđelovac, a small town near Belgrade, there’s a yearly wine festival to commemorate the feast day of St. Tryphon of Campsada (now Turkey). He acquired fame as a healer. Eventually, he was martyred and beheaded in Nicaea in 250 AD. Tryphon is recognized as the patron saint of gardeners and wine growers in both the Orthodox and Roman Catholic churches.

Leave it to the French to celebrate romance in style! Only les amoureux (those in love) get to celebrate the holiday. Inasmuch as the Americans commemorate Singles’ Awareness Day 😂 the French are determined about keeping Valentine’s Day to couples in love – much to the scorn and chagrin of single French people! (Nowadays, some nightclubs go out of their way to cater to single people, though.)

In South Korea, every 14th is a day to celebrate! On Valentine’s Day, women give men chocolate as a sign of affection. A month later, on March 14, is White Day. This time, it’s the man’s turn to show his female partner his love. “White” alludes to the traditional custom of giving mostly white gifts. There’s even a Rule of Three – men are expected to spend triple what the woman spent on Valentine’s Day for him! On April 14 meanwhile is Black Day. This time, singles supposedly gather to eat Black Noodles, or Jjajyangmyeon. According to Korea’s youngsters though, this custom is quickly disappearing.

In the Philippines, couples gather for a “mass wedding” usually officiated by city mayors. The government-sponsored event attracts many couples who wish to jump the gun and tie the knot in a public ceremony on “Araw ng Pag-Ibig” (Day of Love) or “Araw ng Mga Puso” (Day of Hearts). Sometimes, the happy couples take a photo with the other couples and the Mayor – something unique for the wedding album. The weddings come as a relief to poorer Filipinos who can’t afford a ceremony, gown, or gifts of their own.

In 2016, Pakistan’s then-president Mamnoon Hussein told Pakistanis to avoid Valentine’s Day, saying it “has no connection with our culture.” In fact, the Pakistani high court even went so far as to remove all traces of Valentine’s Day from public spaces. There was even a ban on merchandise and advertising. Yet, many romantic rebels, to borrow a nickname coined by National Geographic, found ways to commemorate their love anyway.

Meanwhile, the Welsh recognize January 25 as the Day of Love. They celebrate the patron saint of lovers, St. Dwynwen. Here’s her story, as told by Historic UK:

Dwynwen lived during the 5th century and legend has it that she was one of the prettiest of Brychan Brycheiniog’s 24 daughters. Dwynwen fell in love with a prince called Maelon Dafodrill, but unfortunately her father had already arranged that she should marry someone else.

Dwynwen was so upset that she could not marry Maelon that she begged God to make her forget him. After falling asleep, Dwynwen was visited by an angel, who appeared carrying a sweet potion designed to erase all memory of Maelon and turn him into a block of ice.

God then gave three wishes to Dwynwen. Her first wish was that Maelon be thawed; her second that God meet the hopes and dreams of true lovers; and third, that she should never marry. All three were fulfilled, and as a mark of her thanks, Dwynwen devoted herself to God’s service for the rest of her life.

Dwynwen put up a church off the west coast of Anglesey. It became a place of pilgrimage after her death. It was said that the eels and fish that lived in the well could foretell if a romance was to thrive or go sour. Visit Wales and check out the church’s remains!

Which is right for you?

There are so many unique ways to celebrate Valentine’s Day! Whether you choose to get married, celebrate it well in advance, celebrate it every month, or not celebrate it at all, we at YLT wish that your 2022 will be filled with love, regardless of your relationship status – and, since we’re based in Serbia, with wine, as well!