How you build your listing optimization spells the difference between getting seen, converting your audience, and doing well on Amazon – and being buried at the back of the heap of your search results.

Many Amazon gurus have spoken about best practices in Amazon listing optimization, so there’s a bunch of information out there that you can try. Or you can go to a marketing agency to write your listing for you – they’ll probably do a better job at the keywords and writing engaging content, but will definitely be more expensive than doing it yourself. If you’re insecure about your copywriting, we strongly suggest you employ a professional agency!

Nevertheless, the minute your listing goes global, there are many other factors to consider when you build your Amazon listing. What converts on US soil will not necessarily do as well on European or Asian soil.

Let’s say you’re selling on Amazon.com as your primary market, Your Amazon keyword research is focused on the US market and what typically converts an American customer. The vocabulary you use is focused on Americans. So the keywords that you generate will also focus on an American audience.

These same keywords will not work across the board. By no means should you put those keywords through machine translation and assume they’ll convert a European or Asian audience as well! Make sure you research keywords anew for every single market.

Once you’ve stuck your healthy keywords in the title, there’s no need to repeat them throughout the listing anymore. Once is all you need to trigger the algorithm that this is an important keyword.

Are you selling in a bilingual country? Take Canada for example – many keywords are in both French and English. Stick to one language for your listing proper, and stick keywords in the other language in the back end. The algorithm will still pay attention to those keywords, but you’ll keep the integrity and language of your front end nice and tidy.

Even in the US, a lot of sellers never think of having their backend search terms written in Spanish (MX). Just think about lost opportunity to target the whole Hispanic population in the US. You definitely woudn’t be targeting every potential buyer in the US with your listing just in English. Think about that when you optimize your listings, and we are sure you will definitely see a big results in at least impressions increase.

Of course, always keep in my that you should never translate the keywords, but do keyword research for each marketplace separately. 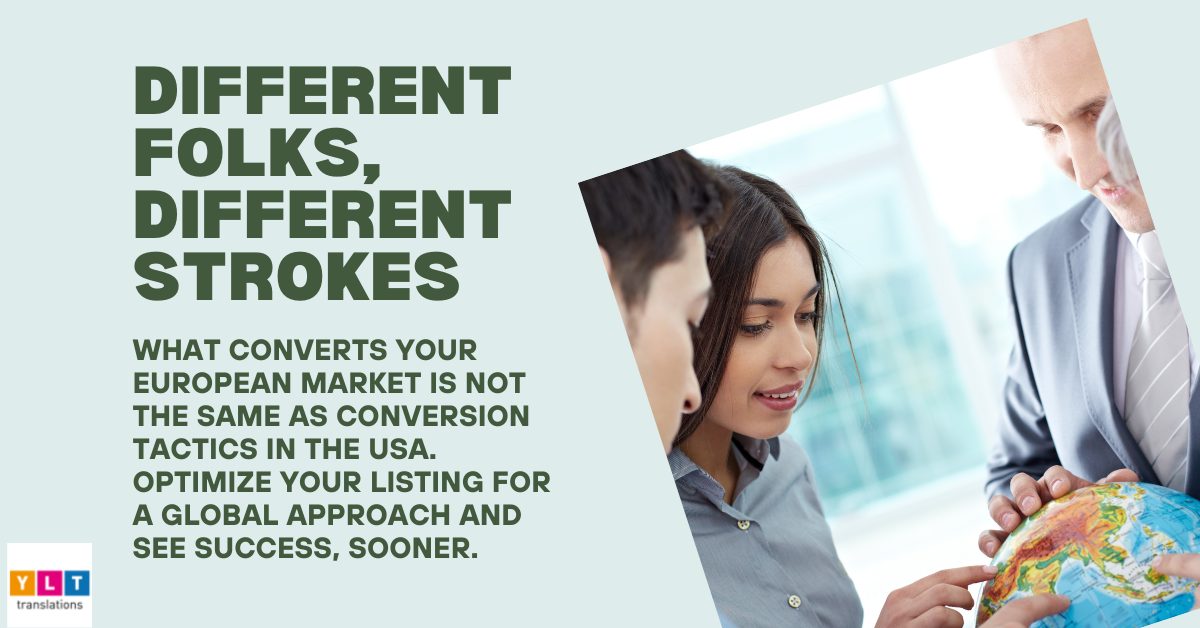 YLT Translations employs native speakers to optimize its listings per country. Only Germans will write a German listing, only a Spaniard will write a Spanish listing, and so forth. It’s really important that native speakers translate your listing – because they don’t just translate, they localize. That means they know what language, idiomatic expressions, and pop culture references a target market is interested in, and they pepper that in the copywriting. The result is voice of customer. The consumer of your content reads the listing and can imagine themselves saying those same words. There’s a much higher likelihood that the listing will convert because it sounds and feels familiar to your target audience.

Are you selling in Europe? A good rule to follow is to tone down the sales-y, flowery language (but keep it for the US market). Americans like being convinced in a conversational tone, but Europeans prefer facts that talk about quality and how the product solves a problem. Europeans prefer to come to their own conclusions about a product, as opposed to being convinced of its merits.

Also, grammar is crucial. Take, for example, listings in German – German is a very precise language, with many grammar rules. As a culture, Germans think grammar is very important. Make sure you respect that cultural idiosyncrasy and review your grammar 3 or 4 times before publishing.

Did you know your bullet length has an impact on conversion? Amazon allocates up to 500 characters per bullet, but it’s probably not a good idea to use all 500. That being said, each target country has its own preferences.

Since Amazon.com is the largest marketplace, it makes sense to employ longer bullet points to give yourself more real estate for valuable keywords. There’s a lot of competition in the US – you’ll need a solid keyword strategy and some clever copywriting to get ahead. Think anywhere between 250-400 characters per bullet.

The Latin-blooded Europeans like the Spanish, Italians, and French prefer more straightforward bullets, because of how traditional and sophisticated their cultures are. Remember how we said that they don’t want sales-y language? As a result, your bullet length doesn’t need to be that long, either. Just state the facts and trust your market to make the right decision. Furthermore, these cultures despise keyword stuffing – and since the markets are smaller than the American market, you won’t be getting as many keywords as your American listing probably does. It’s safe to allocate 200-300 characters per bullet. Ever seen big brands produce listings with a single line per bullet? This is a bad idea too, because it’s a waste of real estate. You have space! Be sure to use it. If not to get discovered through a good keyword strategy, then to create a relationship with your target customer.

German though is an interesting language. Keywords are often compound words – several words stuck together to make a totally new word. Since their language is so unique, the German customers don’t typically mind reading longer listings. Go ahead and hit up to 400 characters per bullet. Also, the amount of keywords you’ll find will likely be a lot – Amazon Germany is the second largest marketplace after the US!

And here’s are the DON’TS:

That’s about it! Do you have more tips you employ in your listings? Share them with us!