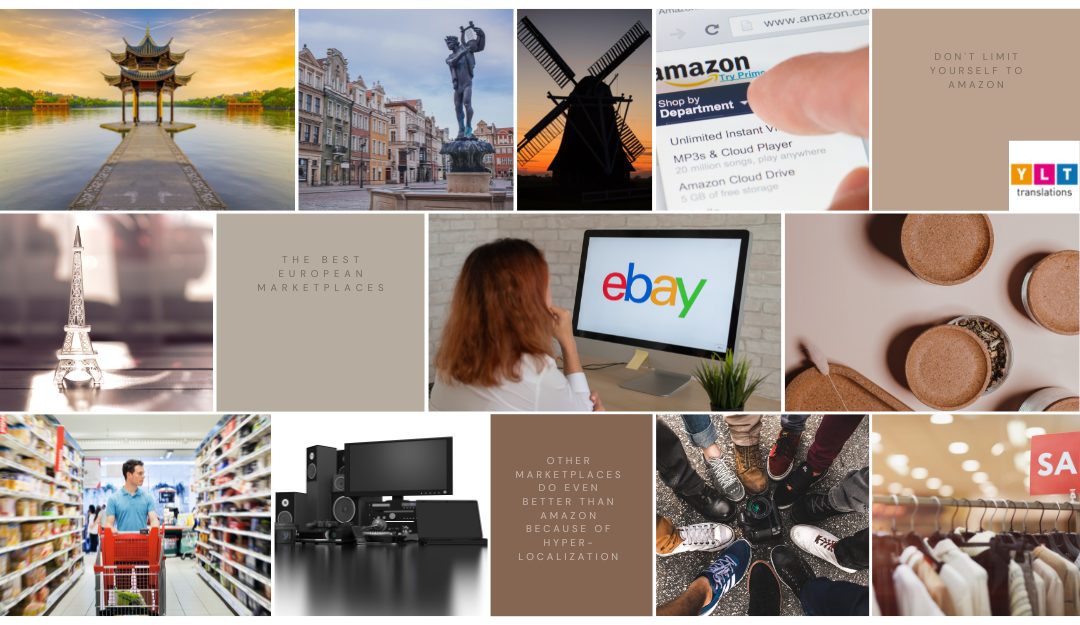 Comparehero says it best: “Local online stores are of course, localized and therefore they are usually more relevant as they cater to the direct demands from the local market – sans the expensive shipping cost.” The same holds true for many European marketplaces. Leading the pack are Amazon and Etsy, but other hyper-localized players deserve their spot in the sun, as well. Most of the ecommerce action happens in the UK, France, Germany, and Spain, but other countries like the Netherlands and Poland are picking up the pace. Statista predicts that the European marketplace revenue will reach US$662.50bn at the end of 2022.

In no particular order, here are the European marketplaces that lead the pack.

The B2B Chinese marketplace is owned by Alibaba. It connects small Chinese enterprises with international buyers. In 2020, AliExpress was the most visited eCommerce site in Russia. As of 2016, AliExpress has been localized into English, Dutch, Spanish, Portuguese, French, German, Italian, Polish, and Turkish.

Alibaba, AliExpress’s parent company, declared $29.1bn in Q3 revenue – a growth of 3% vs. the same period last year. However, the group looks to be slowing down in Europe, possibly due to the new EU VAT rules came into effect. AliExpress claims 4% of the European marketplace – a far cry from Amazon’s 20%. Let’s see if the economic recession and rising shipping costs continue to delay AliExpress’s expansion across Europe.

Poland’s favorite marketplace has massive presence in its home country. Gemius, the market research company, showed in 2019 that 80% of Polish people identified Allegro as their preferred brand in the eCommerce space. Allegro began as an auction site in 1999 – its first program was on a floppy disk! Nowadays though, not even eBay is on the mind of Polish online shoppers. Its closest competitor could be AliExpress, which sells exotic items not available on the hyper-localized European marketplace.

Nevertheless, similar to many of its contemporaries in the European e-Commerce space, Allegro trimmed its full-year guidance. They fear that high prices will reduce consumer spending. High inflation and rising costs of living show a dismal outlook for Allegro; it expects to close the year with an EBITDA of 120-160 million zlotys.

Nevertheless, the Polish platform’s rise is focused and deliberate; it hired on Roy Perticucci as its new CEO last September. Perticucci is the former Amazon lead for the European Operations/Customer Fulfillment, and he held the same position in the North American division prior.

Amazon welcomes around 6.5bn visitors a year from Europe alone. It’s also one of the most important marketplaces for RetailX Top 500 companies, who seek to increase their foothold by using Amazon as another door to widen their eCommerce strategy.  In 2021, Amazon EU S.a r.l. reported a revenue of over €51bn – an increase from the previous year.

Amazon’s biggest European market in 2021 was Germany with close to €31.6bn in net sales. The UK followed suit with €27.9bn. The platform boasts around 185,000 SMEs selling on various Amazon marketplaces in Europe – and 50% of these sellers have sold their products to customers around the world.

The platform hopes to expand across Europe aggressively; in fact, it just opened Amazon Belgium.

Another hyper-localized brand, Dutch marketplace bol.com caters to the Dutch and the Walloons of Belgium. It lists around 11mn items from bol.com’s owned brand, which sit alongside the products of 50,000 3p brands and sellers. It has reported that it attracts around 225mn visitors per year. It generated €5.5bn in revenue in 2020 – a growth of 27% YOY.

The marketplace has made it challenging for Amazon and eBay from earning any sort of success in the Dutch market. bol.com is written only in Dutch or French; its approach is very keenly situated around the specific wants and needs of the Dutch and the Walloons. Perhaps due to this, bol.com grew revenue by 5.6% in 3Q2022 vs. last year.

Everyone’s favorite French sports megastore covers clothing, sports apparel, and equipment across 60 countries, including France, Belgium, Czechia, Germany, Spain, Italy, the UK, China, India, Taiwan, Malaysia, the Philippines, Singapore, South Korea, South Africa, Australia, and Canada. The brand experienced a 21% increase in sales during the pandemic, as people started looking for new hobbies and exercise-from-home options. In fact, online sales grew 30% – 21% of which were attributed to e-Commerce – that’s around €3bn, or a net profit of €913mn.

Lately, the retailer has embarked on a sustainability push. It works with brands and manufacturers that produce environmentally friendly and ethically sourced items. It hopes to have 100% of its products eco-designed by 2026. with 80% of its energy coming from renewable sources.

What began as an auction site – with the first item sold online a broken laser pointer – is now a force to be reckoned with. It reported a net income of $13.6bn in 2021 – a growth of 140% YOY. In 2021, it had 147 million active buyers and 17 million sellers. They attribute their success to a strong team, a payment portal, and effective advertising strategies.

Where its contemporaries are reeling from Europe’s economic crisis, eBay seems to be doing better. Reuters reports that “inflation-wary shoppers snapped up refurbished goods.” It looks like people are still keen to shop – but they’re looking for more value-for-money.

The German online supermarket doesn’t collect is revenue ($100bn in 2021) from online delivery and click and collect of food. In fact, its revenue is focused on the non-food items it sells. It faces stiff competition from OTTO and Amazon.de. It already sells goods from 148 of Europe’s Top 500 brands. The British arm of Lidl noticed that shoppers were starting to switch to it from traditional grocers – more evidence of Europe’s energy crisis. CEO Ryan McDonnell told Reuters, “As a discount supermarket we are in the best possible position to support people through these challenging times.” In fact, it looks like 770,000 more people have started shopping with Lidl compared to the same period last year.

It looks like the increase in living costs in Europe are the chance for discount supermarket Lidl to provide even more value to its European customers.

The German company is one of the biggest electronics sellers in Europe. Gepard.io suggests that it paves the way thanks to innovation, a customer-centric approach, and a wide range of after sales support services. its sellers operate almost like single proprietorships. They’re treated as an independent entity, so store owners take more interest in the success of the business. Currently, the brand does well in Germany. In expanded to Austria and Spain in 2021, and has plans to further expand to the Netherlands and Benelux.

Although Amazon still leads the way in German sales with €15.68bn, MediaMarkt established itself as a brand worth considering in 2021, when it entered the top 3 German online stores with the highest turnover. It even pushed out Zalando.

This well-established brand began in 1949 as a mail-order shoe seller in post-war Germany. It has grown very prettily since then; it generated revenues of around $17bn in 2021, a growth of 2.7% YOY. Online, it’s the second-largest seller in Germany after Amazon.de. 70% of its income comes from eCommerce. In fact, in 2021, it experienced 186mn visits from all over the world.

If you’re a seller in the home furnishings niche, you might want to look at OTTO. It is the top-ranking e-commerce site for online furniture. Domestic sales hit a net worth of €1.5bn – a 37% growth YOY. It’s followed by Ikea, with net sales worth €646mn, and Amazon with net sales worth €555mn.

Fashionistas swear by Zalando – in 2021, it recognized 34.1mn customers with orders worth $12.25bn. It offers 236 of the European Top 500 Brands. The assortment covers fashion and apparel. Essentially, if you’re selling fashion in Europe, you’ll want to list on Zalando.

In fact, Zalando just acquired a majority state in Highsnobiety, a streetwear news and e-comm site with global reach. Zalando’s co-CEO David Schneider is optimistic about the partnership: “Partnering with Highsnobiety will allow us to execute much faster on our ambition to offer the most relevant and engaging — as well as convenient — shopping experience to our customers.”

As it turns out, Amazon isn’t the be-all and end-all of e-Commerce, especially not in Europe.

If you already have an Amazon store, it’s a good idea to explore other marketplaces as well. As you’ve seen in this blog, certain marketplaces do well where Amazon cannot penetrate, especially for specialized items with a hyper-localized touch.